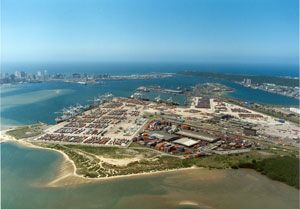 In the 2019 edition of the Global Competitiveness Report published by the World Economic Forum, South Africa was ranked the 60 most competitive nation in the world out of 141 countries, a considerable improvement from being ranked 67th in the 2018. The report consists of 98 variables which are further classified into twelve pillars with the most salient including: institutions, infrastructure, ICT adoption, macroeconomic stability, business dynamism, health, skills, product market, labour market, financial system, market size and innovation capability.

The graph below shows South Africa’s competitiveness rank over time, from 2011 to 2019 (without the outlier year of 2020 underpinned by the COVID-19 pandemic). The figure shows the that the country’s best performance was recorded in 2016, with a ranking of 49. 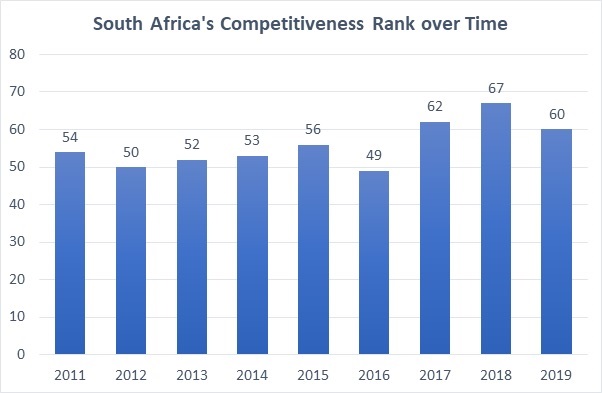 The World Bank Group also releases a global and country-specific Doing Business Report on an annual basis. The report gathers detailed and objective data on 11 areas of business regulation, helping governments across the globe diagnose issues in administrative procedures in order to provide remedy. It measures complex regulatory processes in various countries and provides a comparison over time and across economies, also highlighting areas of reforms and improvements.

The 11 areas of the life of a business covered by the report include:

The inner loop of the image below provides a vivid display and understanding of what factors are considered in determining ‘Doing Business’ drivers. 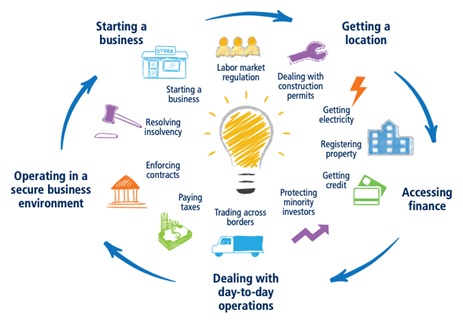 South Africa was ranked 82nd out of 190 countries by the World Bank Group’s 2019 Doing Business Report. The best ranked country was New Zealand followed by Singapore. South Africa country performed best in the areas of ‘protecting minority investors’ (23/190), ‘paying taxes’ (46/190), ‘resolving insolvency’ (66/190), and ‘getting credit’ (73/190). The country’s worst performing areas were ‘trading across borders’ (143/190), ‘starting a business’ (134/190) and ‘enforcing contracts’ (115/190). Although progress has been made in starting a business and getting electricity since 2018, it is concerning in light of this Strategy that South Africa continues to underperform in the area of trading across borders with non-tariff barriers (NTBs) issues including border and documentary compliance being cause for concern. This is an area that requires major national support as this will continue to hinder both exports and investment. Moreover, NTBs have the potential to constrict gains made by South African companies which are currently trading under various trade agreements, including the African Continental Free Trade Area Agreement.

The country’s strengths lie in its outstanding performances in financial market development, the accountability of private institutions and the effectiveness of its competition policies. There was recorded improvement in the ease of doing business starting a business (procedures) sub-category, where South Africa was ranked 7th. This is encouraging and can be attributed to the consequence of the introduction of the new Companies Act, which included the simplification of the company registration procedure. Other sub-categories with improvements include getting electricity, procedures (ranked 5th), and debt of credit information and paying taxes (ranked 7th respectively).

Within the Doing Business in South Africa report, the World Bank Group compares the major South African Municipalities in relation to five key variables, namely, dealing with permits, getting electricity, registering property, enforcing contacts and trading across borders. The table below provides a summary of the main findings of the 2018 report (excluding trading across borders, which is done separately).

Both eThekwini and Msunduzi fare well in dealing with construction permits (ranked 2nd and 3rd  respectively out of 9) and in enforcing contracts (ranked 4th and 2nd respectively out of 9). eThekwini was also ranked 2nd  in getting electricity, while Msunduzi was ranked 8th. Both eThekwini and Msunduzi require significant work in improving their rankings for registering property, which are 8th and 9th ninth respectively. This is largely due to delays in obtaining rates clearance certificates, with the total time in days for transferring a property in Msunduzi being 63, which is double Ekurhuleni (33 days), while eThekwini was 48 days. The best performing city was Nelson Mandela Bay with 20 days to register a property.

KwaZulu-Natal is the second largest productive province in South Africa with a gross value added (GVA) at basic prices of R716,673 million in 2019, which accounts for roughly 16% of South Africa’s total GVA. On average, KZN’s GVA grew at a rate of 5.51% from 2015-2019, which is 0.29% lower than South Africa’s average annual growth over the same period. The economies of the Western Cape and Gauteng all grew at a higher average annual growth rate over the 2015-2019 period, at 5.82%, and 5.89% respectively.

In terms of trading across borders, the study compares four main ports in South African by measuring the time and cost associated with the logistical process of exporting and importing goods. Documentary compliance at the border takes 68 hours and costs US$55 an hour. Border compliance takes 92 hours in the Port of Durban and costs US$1257 on average for exports. This is in line with the South African average in terms of border compliance time (94 hours) but is double the cost. In fact, the cost of export border compliance in Durban is greater than any other port in comparison, and greater than Sub-Saharan and BRICS ports. Overall, the Port of Durban is the lowest ranking port in South Africa.

Source: Lumec calculations based on Quantec, 2018